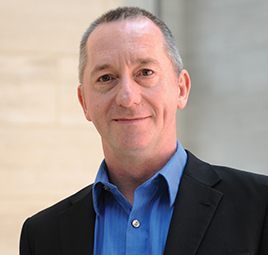 Dr. Gordon Lithgow is Professor at the Buck Institute for Research on Aging. He sheds light on the mechanisms of aging by identifying agents that provide for more healthy, productive years of life and prevent age-related disease.  He has discovered a range of factors that can lengthen life in the microscopic worm Caenorhabditis Elegans, and he applies these findings to studies in human cell cultures.  Much evidence points to stress contributing to a breakdown in the ability to maintain optimal molecular stability resulting in aging and disease. Certain agents help C. Elegans respond to lifelong stress by remodeling the natural stress fighting cellular mechanisms; the Lithgow lab has found.   For example, long-lived mutants of C. Elegans are very stress resistant as a result of elevated levels of “heat shock proteins.” Heat shock proteins promote longevity probably by preventing a loss of protein balance. Long-lived mutant strains are also resistant to heavy metals, so the Lithgow lab is now studying the relationship between longevity and “metallostasis.”

The Lithgow lab has discovered that certain cell proteins capable of providing for more optimal healthspans for individuals can also be closely involved in disease prevention.  However, when proteins play such dual roles, they may sometimes make tradeoffs that affect the fate of the organism.  Dr. Lithgow is studying genetic variations in “checkpoint proteins’’ that may create a trade-off between the rate of aging and incidence of cancer.

The Lithgow lab has made seminal discoveries in the use of pharmacological agents to intervene in the underlying causes of aging-related disease, such as antioxidants that protect cells against damage from unstable chemicals called free radicals. More recently, his lab has uncovered compounds that act as “stress response mimetics” that maintain protein balance and stability. These compounds suppress pathology associated with Alzheimer’s disease. The lab continues to undertake screens for chemical compounds that can combat the systemic causes of aging diseases.

Dr. Lithgow received his Ph.D. in Genetics from the University of Glasgow, Scotland.  He completed postdoctoral training at the Institute for Behavioral Genetics at the University of Colorado, Boulder.  Dr. Lithgow was a Senior Lecturer in Molecular Gerontology at the School of Biological Sciences at the University of Manchester in England before coming to the Buck Institute in 2001.  He is the Principal Investigator and Director of the Buck Institute’s Interdisciplinary Research Consortium on Geroscience.  He is also the Principal Investigator of the Larry L. Hillblom Network on the Chemical Biology of Aging and is the Coordinator of the Hillblom Center for the Biology of Aging Support Award.

Click here to see a compendium of Dr. Lithgow’s mainstream press coverage from around the world